So game one I was playing my good friend Bruce, with his New Kingdom Egyptians. (To view the army list click here). This would be an interesting challenge as Bruce is both practiced with the army from Warfare 2019 and it contains a lot of loose foot which will give my elephants a problem and skilled shooting chariots. So during the PBS opening section of the game I went defender and decided to try to fill the board to limit the room for his chariots to roam. This I felt "This was the less of two weevils"

Deployment:
Game plan was to refuse with my foot, especially as they are outclassed and out number. I decided to be aggressive with my noble cavalry and go straight for the chariots, the aim being to remove their ability to "dance" and get into contact with them as soon as possible before hopefully their skilled shooting could do any real damage. The elephants would be used as  distraction for the Egyptian archers to keep them away from my cavalry. Generally try to avoid contact with his melee expert foot. 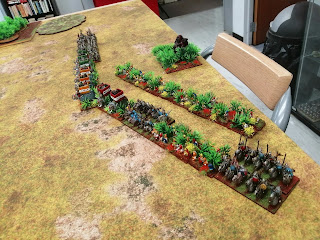 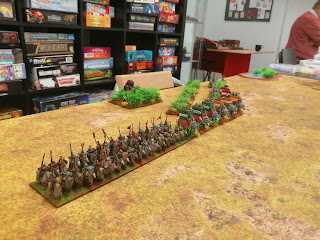 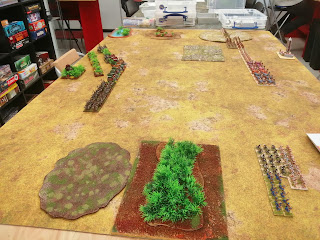 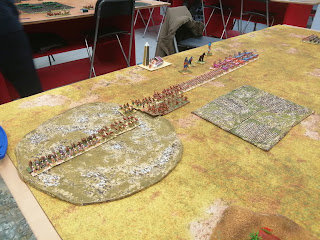 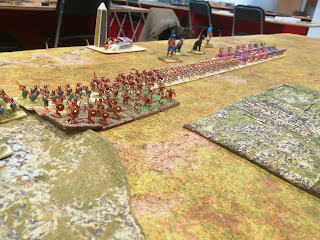 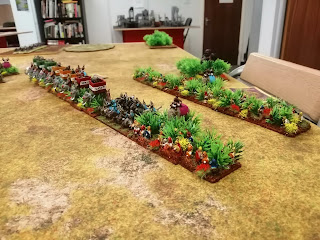 Opening Moves:
Noble cavalry advance and a unit of average cavalry advances to delay the foot from being able to march too quickly. Charging the superior chariots with the fanatical superior Rajput lancers. 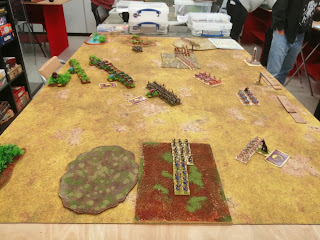 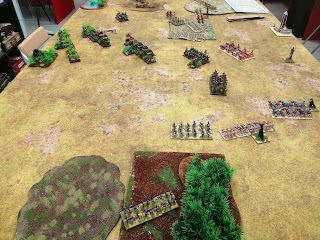 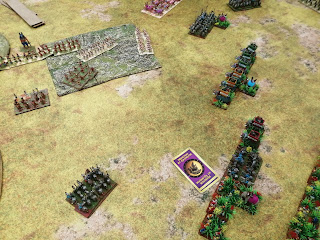 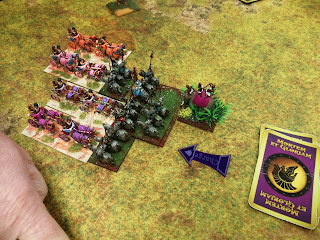 Impact dice for the fanatics: "Really..." 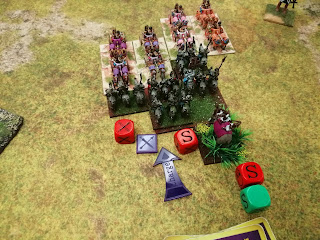 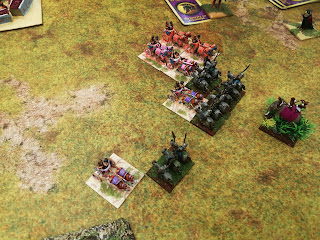 The Egyptian Guard scurry's away to the flank.... 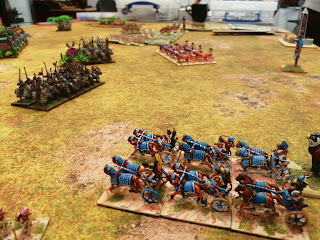 Elephants charge:
A unit of Egyptian archers step out of the terrain to try to shoot the elephants. Unfortunately for Bruce the elephants had not moved, so with a crescendo of trumpeting advance as close as possible ready to charge next turn. 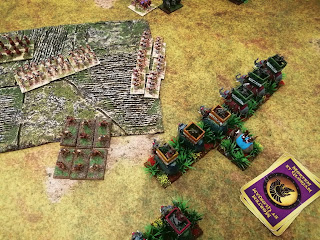 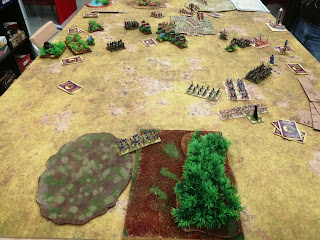 Charrrrge.....
The Egyptian bowmen completely unnerved missed any effective defensive fire as the elephants crash into them, breaking them at contact and then purse into the bowmen behind.Only contacting one base doing some, but not critical damage. In time these break and the elephants charge into some supporting bladesmen and eventually routing them as well. Which was fortunate as this moved them out of a very dangerous flank attack by other units of bladesmen. 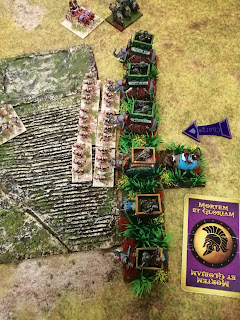 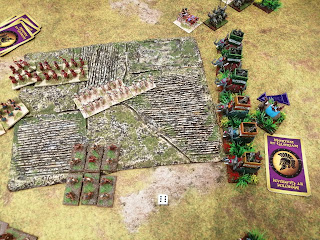 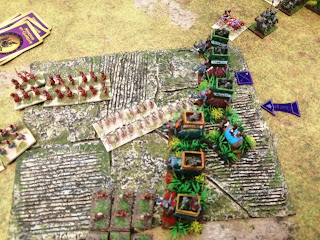 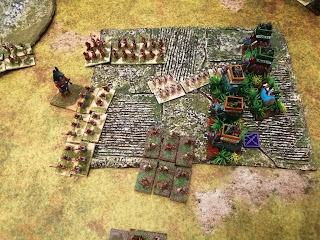 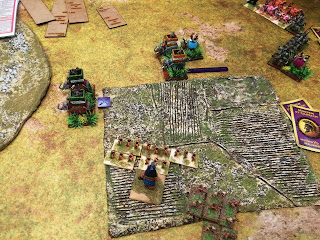 Meanwhile.....
As fanatics and elephants grind through their opponents the other noble cavalry grind down the Egyptian Guard Chariots, finally breaking them at the expense to themselves. Units of average lancers are re-tasked away from the elephants to support the noble cavalry and absorbing losses on their behalf. 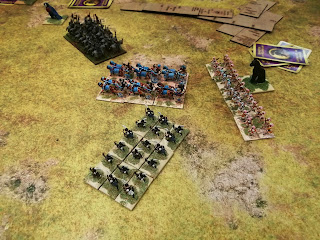 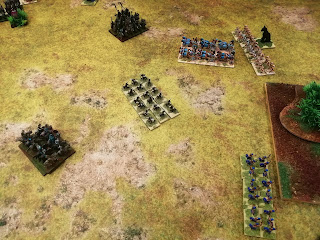 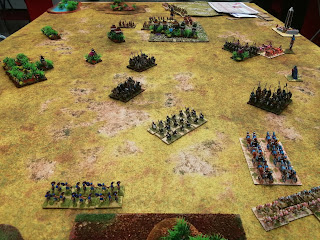 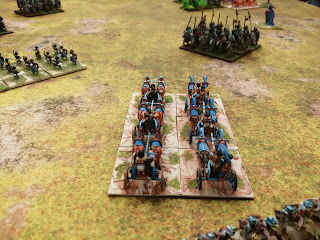 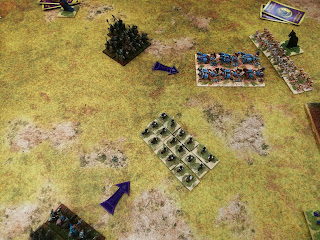 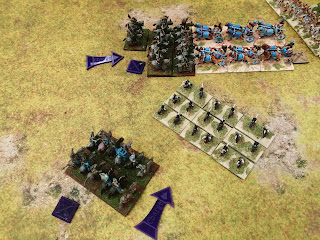 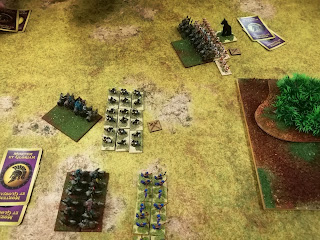 The End.
Time was called at 3hrs and a final victorious score of 12-6 to the Rajputs. To see game two click here


The rest of the game:
Fewer pictures this time I am afraid is it became quite focused and tense in a nice game way. The key thing was that RJC elected to push up aggressively and skirmish away from the single line of fanatics. This turned out to be a miss calculation and the wing of chariots quickly collapsed to a combined assault of lancers and elephants. One escaping to their own back edge, eventually killing to two units of elephants…
Post a Comment
Read more

Drums and Muskets: French Vs Austrian (1813)

October 27, 2019
Alan kindly brought over some of his large Minfigs collection for a game of Drums and Muskets. (Plug alert) My new free fast play Napoleonic rules.
We set up a very sociable "beer and pretzels" game of French Vs Austrians in 1813. The Austrian force defending a river crossing against a French Line Brigade of 12 battalions.

Austrian centre and right with a bridging unit.
TheFrench won the deployment initiative but in doing so the Austrians get first move. In Drums and Muskets, each unit gets a number of actions, shooting, moving, reload etc and the players resolve these alternatively. Instead of the Shooting, moving combat phase system. Also unit morale is not finally known till after deployment. This is resolved by a D6 within a range depending on the unit. There are three morale (resilience) grades. Lacklustre, Steady and Determined.

Cotton wool is used to indicate which units have shot but have not reloaded. Units also have training grade which controls the number of combina…
Post a Comment
Read more