Drums and Muskets: French Vs Austrian (1813)

October 27, 2019
Alan kindly brought over some of his large Minfigs collection for a game of Drums and Muskets. (Plug alert) My new free fast play Napoleonic rules.

We set up a very sociable "beer and pretzels" game of French Vs Austrians in 1813. The Austrian force defending a river crossing against a French Line Brigade of 12 battalions. 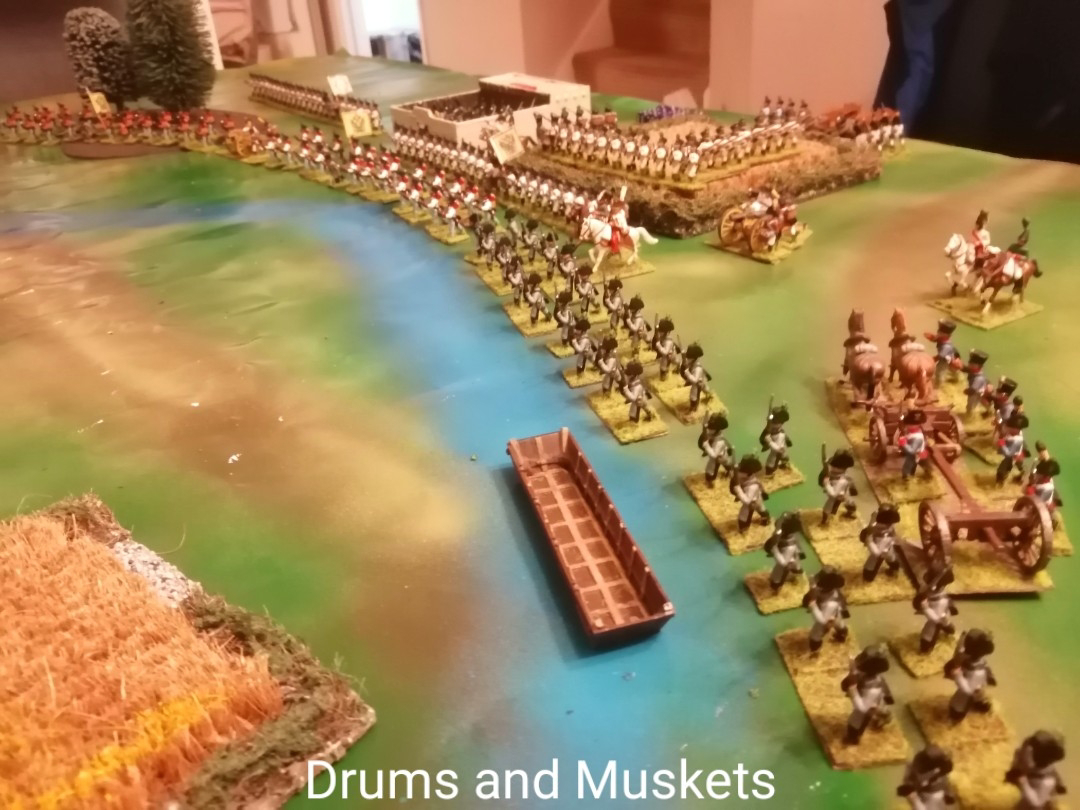 Austrian centre and right with a bridging unit.

The French won the deployment initiative but in doing so the Austrians get first move. In Drums and Muskets, each unit gets a number of actions, shooting, moving, reload etc and the players resolve these alternatively. Instead of the Shooting, moving combat phase system. Also unit morale is not finally known till after deployment. This is resolved by a D6 within a range depending on the unit. There are three morale (resilience) grades. Lacklustre, Steady and Determined. 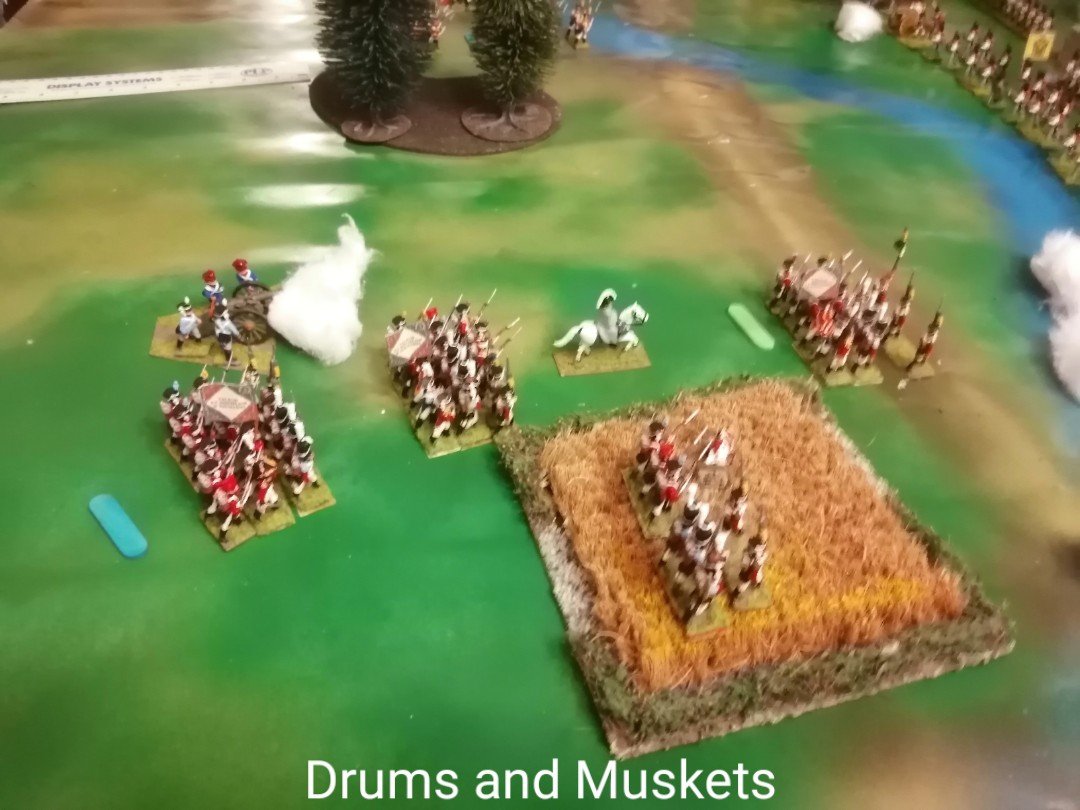 Cotton wool is used to indicate which units have shot but have not reloaded. Units also have training grade which controls the number of combinations of actions a unit can complete. The training grades are Fresh, Competent and Professional. 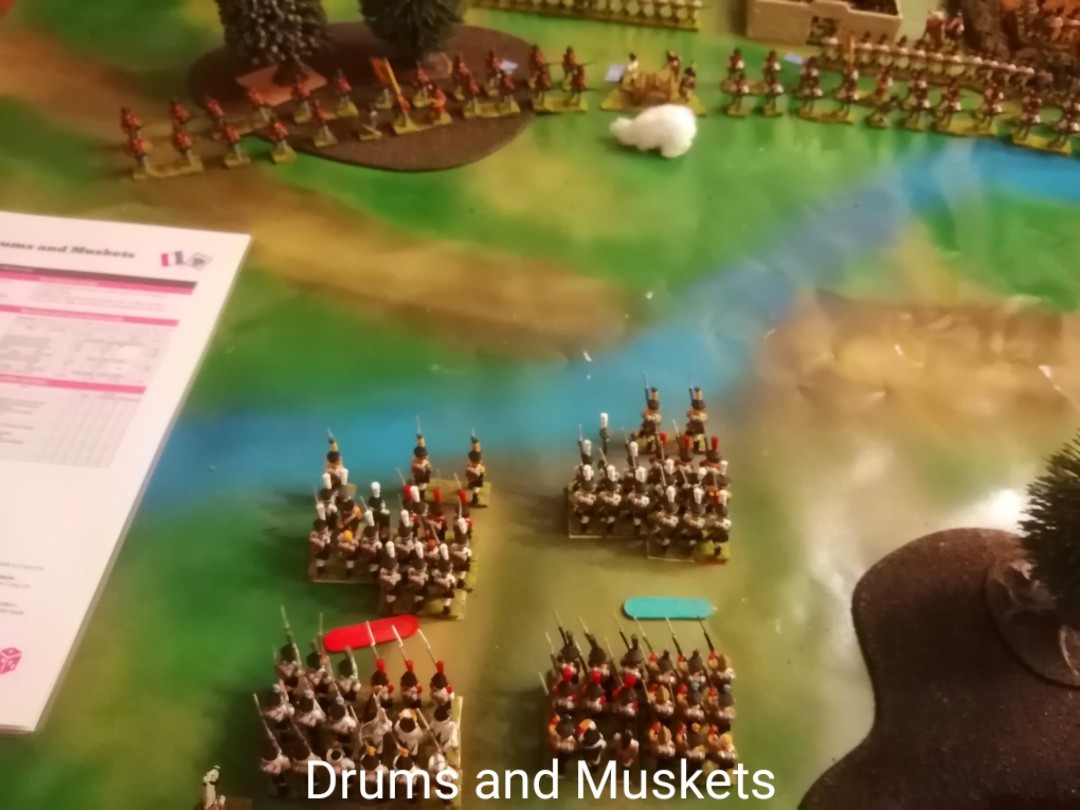 The red marker shows if a unit is Lacklustre and the green marker indicates the unit is determined. Movement distance is defined by rolling a D6. Although units trained to maneuver in a certain way, keeping exact pace can be challenging on the ground. Charge distance is fixed as a game control. 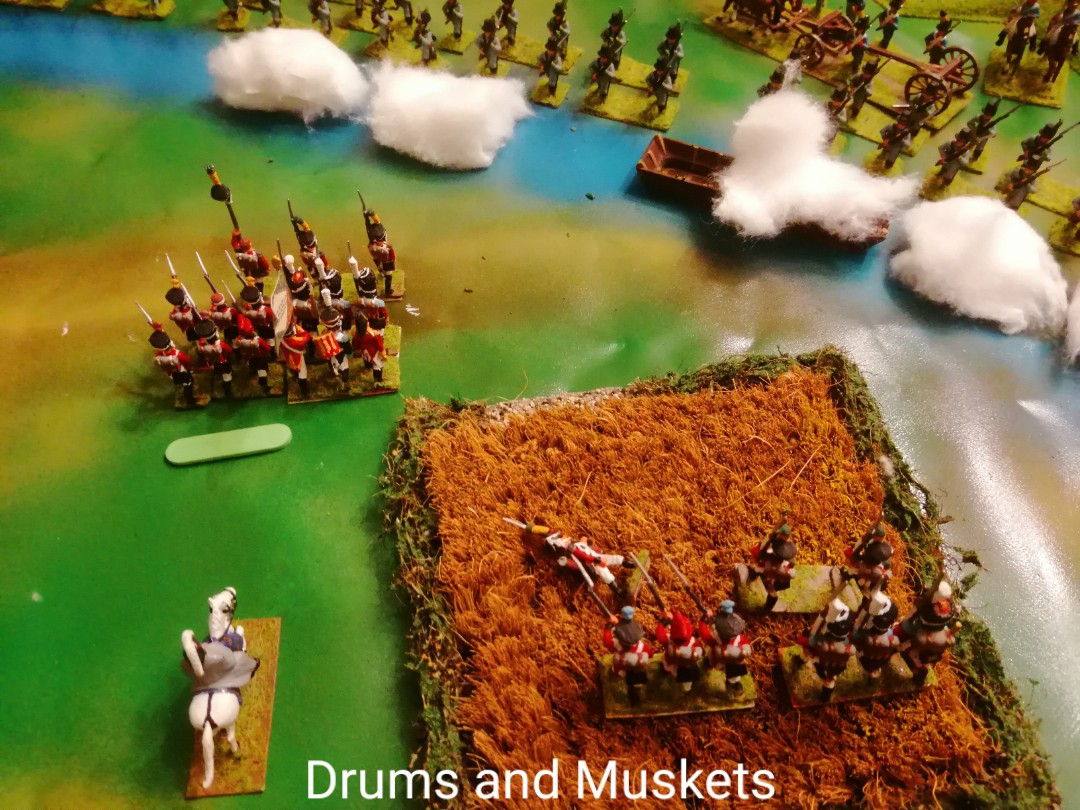 The rules allow for light companies to skirmish forward. This affects number of shooting dice and casualty allocation on the target unit. 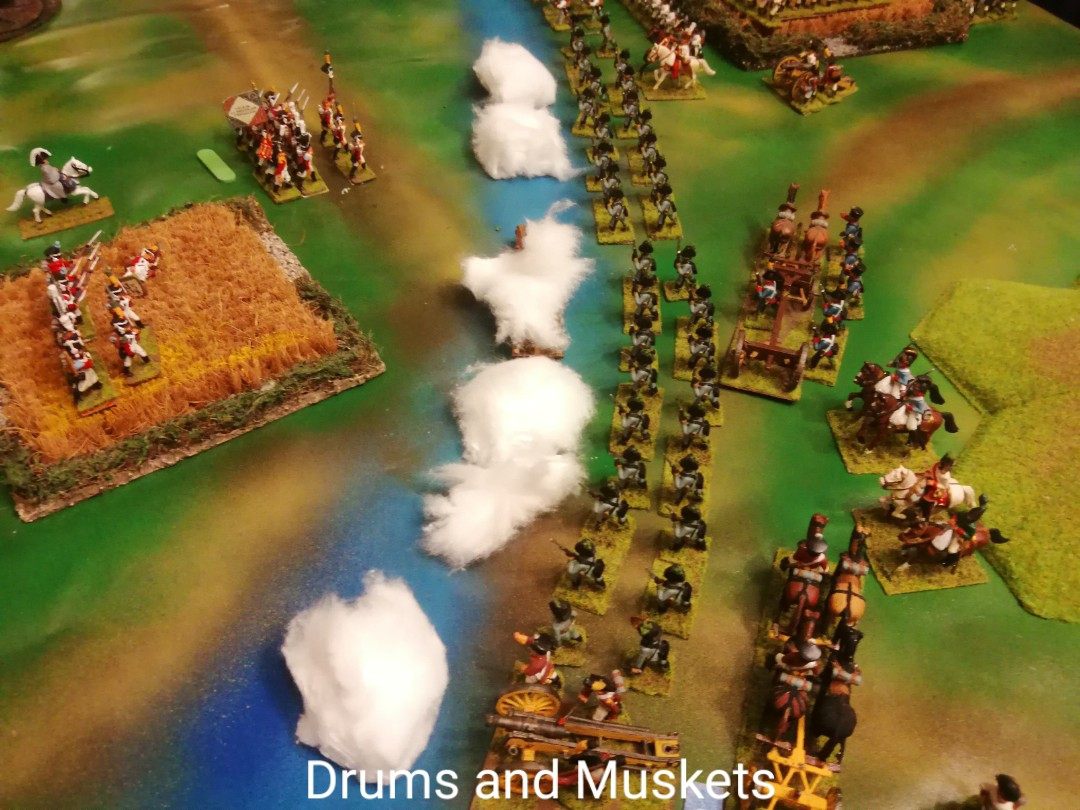 Whole units of light troops can be deployed in skirmish (open) order and have advantages in terrain, moving and recieving fire. Additionally, units hit by skirmish troops can have a negative effect on their morale, should a resilience test be needed. 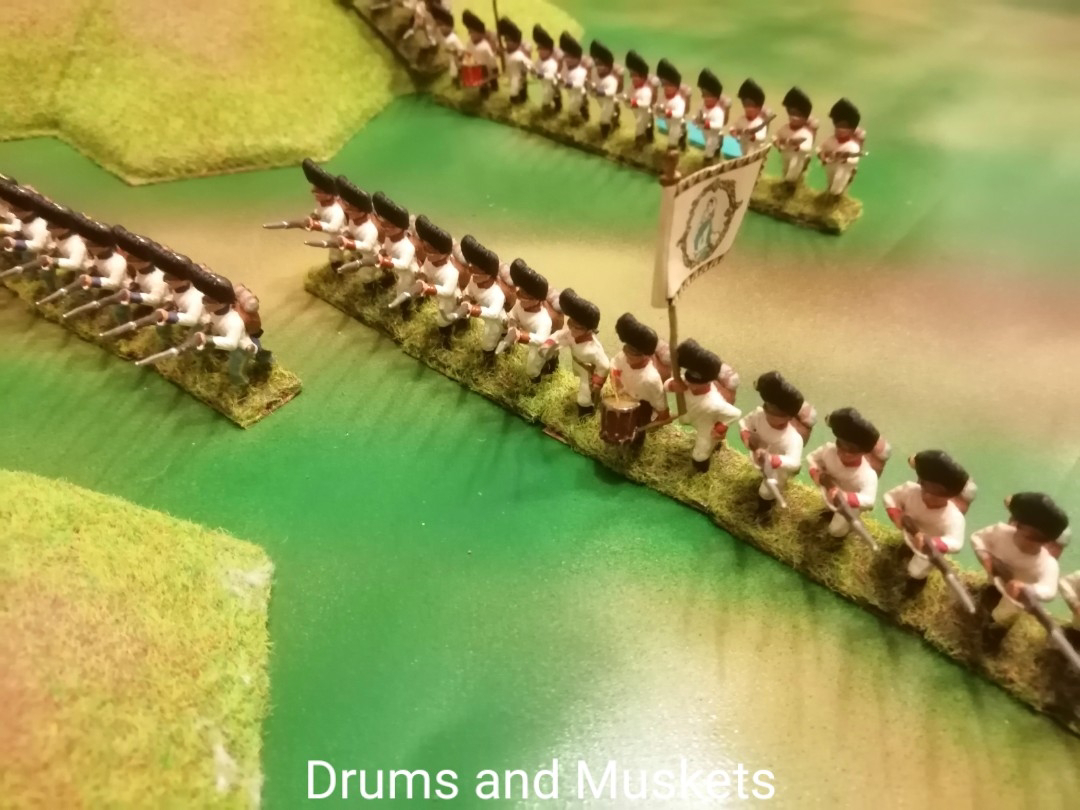 The Austrian Grenadiers are shown in line. Drums and Muskets, uses 1 inch to represent 25yrds. Model ratio is 1 inch is 75 men in three ranks or 50 men in two ranks. Casualties are done in figures. This allows a simple way to match distance and men ratios in the game without lots of housekeeping paperwork. 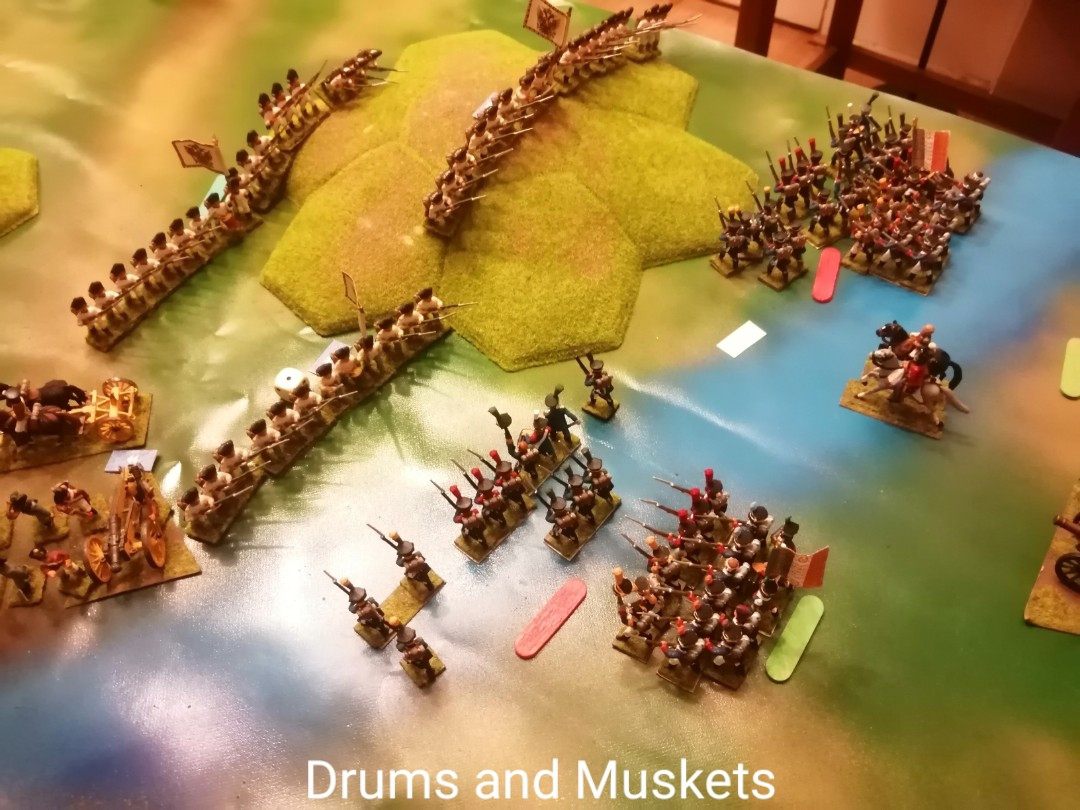 Columns of Attack are represented by a block of models atleast 3 ranks deep. Columns gain advantages when moving and charging, but have disadvantages in shooting. Line formations have the reverse.

So, back to the game. Basically the French probed the river line but did not get across due to sterling shooting by the Austrian Advance Guard.

So game one I was playing my good friend Bruce, with his New Kingdom Egyptians. (To view the army list click here). This would be an interesting challenge as Bruce is both practiced with the army from Warfare 2019 and it contains a lot of loose foot which will …
Post a Comment
Read more


The rest of the game:
Fewer pictures this time I am afraid is it became quite focused and tense in a nice game way. The key thing was that RJC elected to push up aggressively and skirmish away from the single line of fanatics. This turned out to be a miss calculation and the wing of chariots quickly collapsed to a combined assault of lancers and elephants. One escaping to their own back edge, eventually killing to two units of elephants…
Post a Comment
Read more